Indian companies, across both private and public sectors, announced new projects worth ₹43,400 crore in the June 2019 quarter, 81% lower than what was announced in March quarter and 87% lower than the same period a year ago.

According to CMIE data, private sector projects are being stalled at unprecedented rates. The stalling rate is calculated as a percentage of the total projects under implementation so that the values are comparable across time. The stalling rate of private sector projects, which has hovered above 20% since the September 2017 quarter, reached an all-time high of 26.1% in the June 2019 quarter. Within sectors, the manufacturing and power sectors have suffered the most with stalling rates of 27.2% and 20.4%, respectively. They along with the service sector contribute to 92% of the total stalled projects. 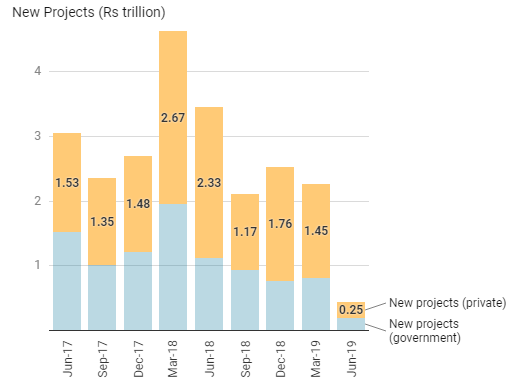 Posted by Kamalesh P Langote at 8:18 AM