- today there was an intraday spike of 10% in the stock 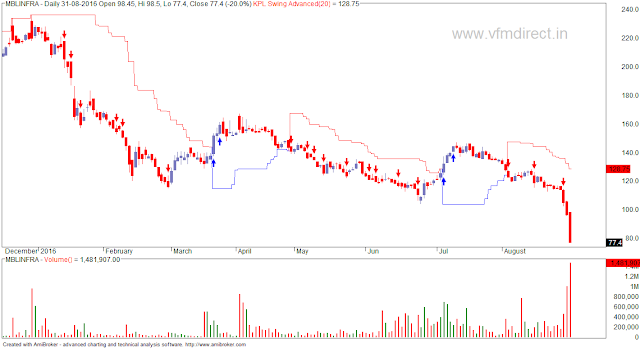 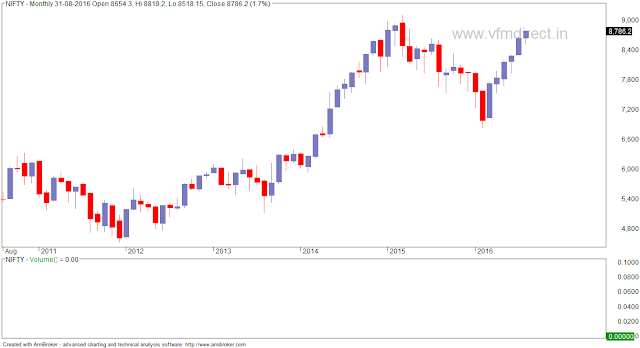 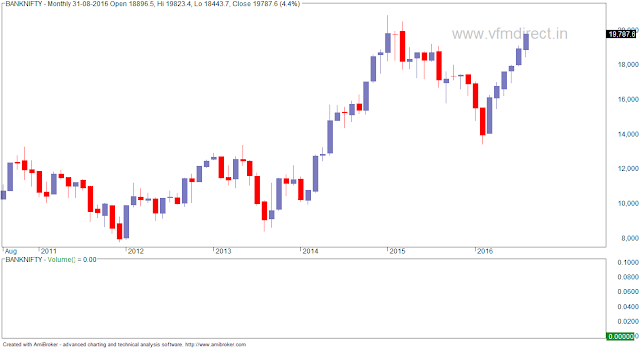 Posted by Kamalesh P Langote at 5:38 PM No comments:

Daily charts:
- trend is up on daily charts
- today markets closed in positive
- but advance decline was negative
- option writing support remains at 8500 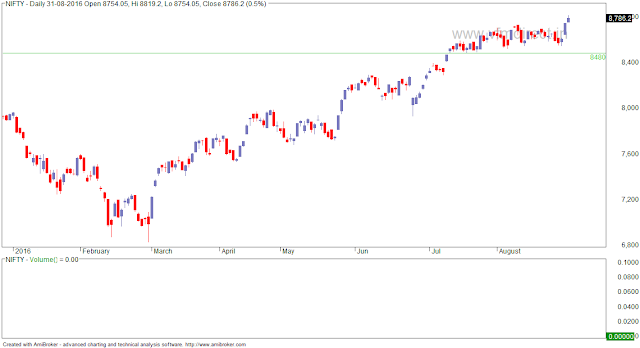 Daily charts:
- trend is up on daily charts
- today markets up 1.6%
- advance decline nicely positive
- today's closing is highest for this year
- option writers bullish; do not expect 8500 to break
- my support level for this market - 8480 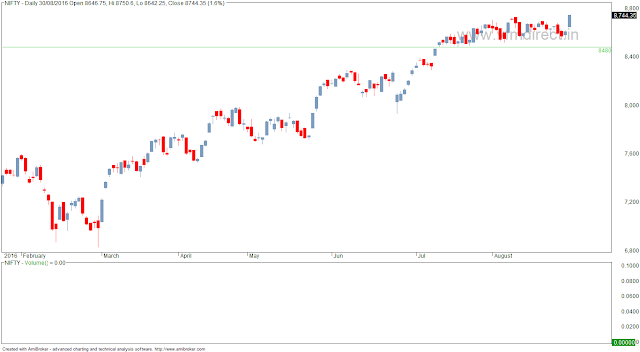 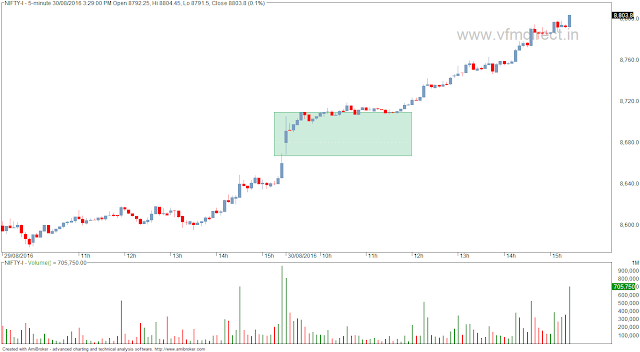 Posted by Kamalesh P Langote at 8:35 PM No comments:

Posted by Kamalesh P Langote at 11:48 AM No comments:

Posted by Kamalesh P Langote at 11:46 AM No comments:

BALRAMCHIN trend down next major support 100 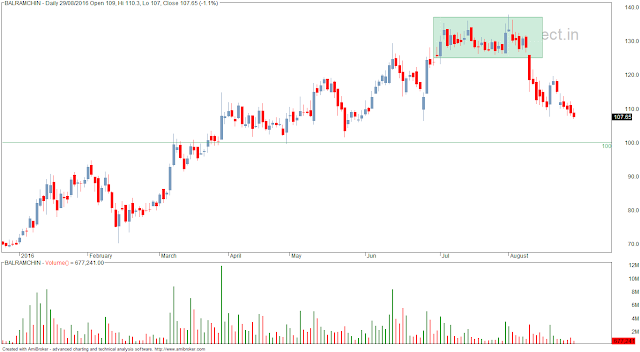 Posted by Kamalesh P Langote at 6:10 PM No comments:

Daily charts
- trend is up on daily charts
- today, markets closed in positive but AD was negative
- however NF has made on real progress in past few weeks
- pattern looks like a rounding top
- this has bearish implications if neckline (8480) breaks.
- option writing support 8500. 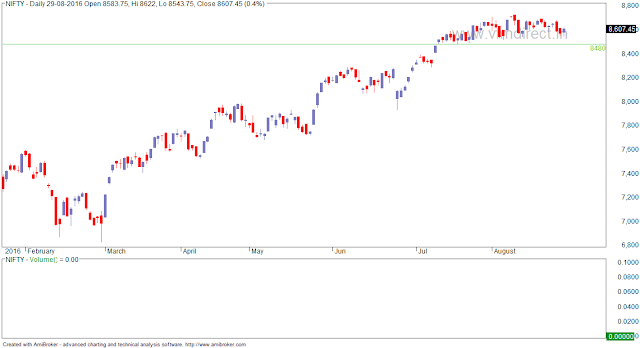 The Face of Persuasion

.... both Trump and Clinton have chosen fear as their persuasion tool. Trump wants you to fear terrorists and criminals because he thinks he can make a persuasive case that he’s the solution to those fears. Clinton asks us to fear Trump himself, offering herself as the solution to that fear.

So which fear is stronger, persuasion-wise?

Trump makes us fear dangers that are unlikely to have a personal impact on most of us. It is deeply unlikely that any one specific person in America will die in a terror attack. And if we stay away from high-crime areas, the odds of getting murdered are low too. So Trump’s fears have an abstract quality about them.

Clinton cleverly makes the public fear Trump having access to the nuclear codes. That’s a danger that could – in Clinton’s telling of it – kill us all. By that point of view, if you buy what Clinton is selling, Trump is a danger to you personally.

Clinton, on the other hand, cleverly defined Trump as the biggest risk to the survival of the country. Not only does Trump have a face, but we see that face multiple times a day to remind us. That’s an enormous persuasion advantage for Clinton. She is selling a fear that has a face, and it’s a fear she says could kill you personally, as opposed to killing strangers.

Trump is selling a faceless, abstract flavor of fear. That has far less potency than Clinton’s approach because humans are wired to give extra emotional weight to human faces.

Fear is the most  powerful persuasion tool, and Clinton has the stronger position there. I still predict Trump will win in a landslide, but he needs to solve for this first.

Posted by Kamalesh P Langote at 1:14 PM No comments:

This “Elliott Wave Analysis Updates of Nifty for 29 Aug 2016 Onward” I am posting as further updates on my last analysis report “Nifty is Still Indicating Bounce above 8728 – EW Analysis for 26 August Onward” as Nifty already declined very near to stoploss 8539.
Nifty opened gap up today at 8614 and bounced marginally till 8622 but failed to sustain at higher levels and declined gradually by 80 points from high to register day’s low 8547 followed by a bounce of 80 points before closing 19 points down at 8572 .

Yesterday, short term trading strategy was “Buying on Dips” and suggested to buy Sept 8800-8900 Calls on decline till 8541 using exact stoploss of 8539. Nifty declined very near to stoploss and registered low 8547 on Friday.

Let’s have a fresh look at latest charts for further scenario.

Read more at http://sweeglu.com/elliott-wave-analysis-updates-of-nifty-for-29-aug-2016-onward/
Posted by Kamalesh P Langote at 8:24 AM No comments: 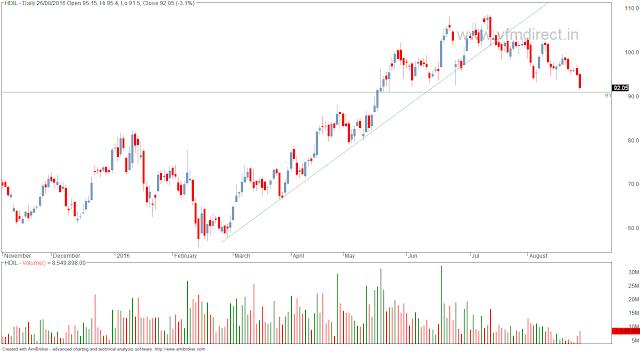 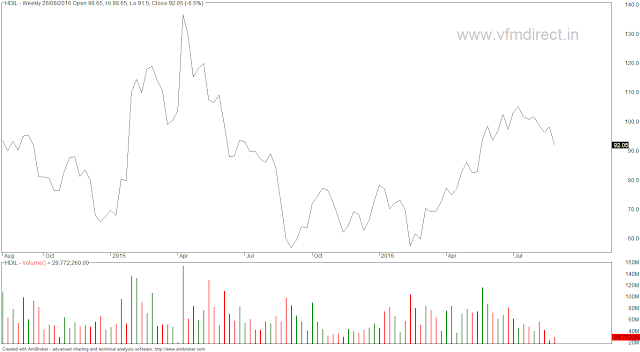 Posted by Kamalesh P Langote at 8:57 PM No comments:

All stocks are in downtrend so I will not comment individually .. support resistance lines are drawn on charts 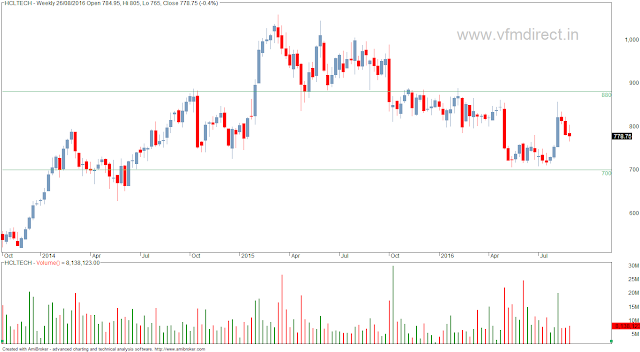 Read more »
Posted by Kamalesh P Langote at 8:24 AM No comments: