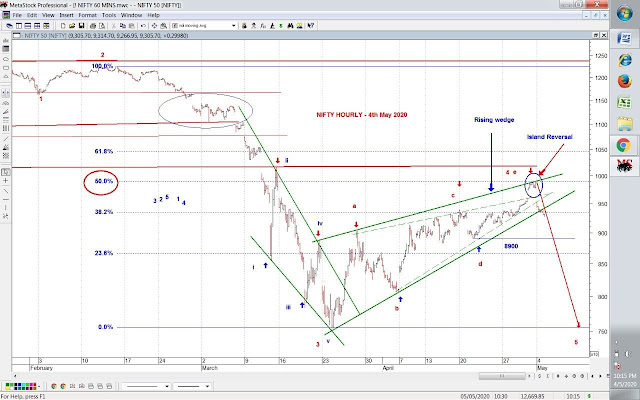 The Nifty seems to have a completed a textbook bear market rally.

The evidence that it has done so are:
1. Nifty retraced 50 percent of the fall at 9900
2. An Island Reversal was formed, which is an island of bars separated from the rest of the price action .
3.  Nifty formed a textbook Rising Wedge marked by green lines—a very bearish pattern, which is basically a triangle which looks like a door wedge, hence the name.
4. For the record a triangle consists of 5 waves: a b c d e5. Prices have broken below the base of the triangle, a further move to below 8900 will result in increased selling and a confirmation of this bearish pattern.

Bottom line we are heading toward Nifty 7500 and possibly below.